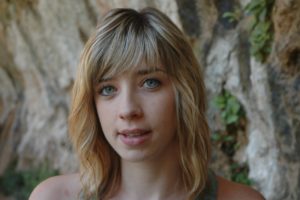 Sorry for the delay in updating the past few days! We have really missed the twenty-four-hour support of IHC, and as a result, haven’t had much time to write daily updates.

As you know from the last post, Carly is HOME! Her departure from the hospital was a little traumatic because we had driven two cars to the hospital that day. Janie went down to pull her car up to the door, where we loaded Carly and her belongings. Carl then walked to his car as Janie and Carly left the parking lot. Carly became very agitated and nervous the moment they turned onto the street. She was so upset that Janie had to stop the car. That is when, for the first time, Janie heard Carly’s small voice say “Dad”. Janie explained that he was in another car, and right about that time Carl pulled up behind them and stopped. From that point forward Carly was fine.

Carly was very excited to walk into her new temporary home! You may recall from a  previous post that the Blalock’s have graciously opened up their beautiful home and allowed us to live with them until we can get on our feet. Carly walked in and began to grin from ear to ear! She walked through each room in the house, wide-eyed and grinning. After exploring most of the house, Carly walked into the large glass walk-in shower in the bathroom Carl and Janie are using. Carl was worried she was going to turn the shower on, but instead, she picked up every bath and hair product and looked it all over, dropping the items she didn’t like on the shower floor, and then walking out! No doubt despite her lack of speech, she still has an opinion!

We have spent the past few days getting settled in with Carly at home and working every possible angle to get her into various rehab programs at Intermountain, University of Utah and The National Ability Center in Park City, Utah. In addition, there’s been a lot of paperwork to get straight. Not only for those rehab programs, but also for the Social Security Administration. We have been working on various therapy drills that the rehab floor taught us before leaving the hospital.  The bottom line is that there really isn’t that much new to report on Carly’s progress. While we know and realize Carly has a long way to go, we only have to look back at the last month to see the miracles and assure ourselves that she is going to make a full recovery.

On Sunday afternoon we went for a short walk/hike in the canyon close to the Blalock’s house. It was a great day to be outside! Carly does great walking as long as you let her go fast. When she slows down, balance becomes an issue, but she hasn’t come even close to falling. It just scares you a little when she begins to weave around.

Carly’s first outpatient rehab appointment at Intermountain for occupational and physical therapy is tomorrow. The appointment is mostly an evaluation. Please pray that she would get an appointment in speech therapy quickly! So far she is on the extended waiting list for this therapy and does not have any future appointments scheduled with any of the therapies.