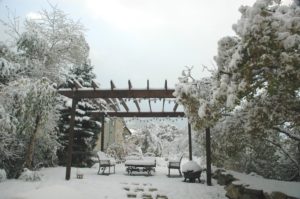 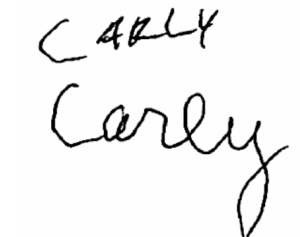 Carly just got back from today’s speech therapy session. Her therapists are very encouraged by her progress.  They not only work on speech but also deal with cognitive and memory issues.  The big news for today was a tremendous improvement in handwriting.  When Carly was in the hospital rehab unit she was signing her name very well at the end of her stay.  One of the first things we noticed when she came home was almost overnight her handwriting went totally away.  It became just simple scratches on the page, almost as though you were trying to get a bad pen to write.  It was one of those wow hmmm things.  Well, today she walked in and signed the check-in sheet as she always does.  I noticed that the first two letters were actually very good.  I told Hadley (her therapist) and with her encouragement, she developed the ability to totally write her first name.  Carly is probably back to about 60% of what she was doing in the hospital, but it came back all of a sudden.  Very encouraging. 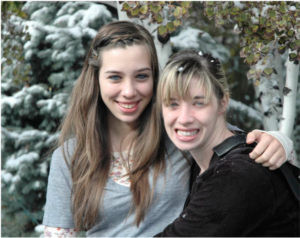 We woke up to 5” of snow in the Salt Lake City area.  Yesterday it had snowed and covered the mountains behind the home we are living in.  Last night we went grocery shopping and it started to snow when we were driving home.  Started coming down real hard later in the evening.  With the first snow of the season, it is nice to see the white fluffy stuff back.

We have had many questions about Katie’s surgery.  First, it has been rescheduled for Friday morning.  On Monday evening they called and rescheduled for Friday, saying that the doctor had an emergency pediatric case that needed attention. When Katie explained that Janie was already in town, they moved it up to Thursday. The doctor then realized he would feel pressured for time on Thursday, so it was moved back to Friday so that he could have a fresh start in the morning and not feel rushed.

When people hear that Katie has been seeing an Orthopedic Oncologist, the first thing they ask is, “Is it cancer?”. The answer is, we really don’t know. There are no blood tests for these types of cancer, but statistically, it is unlikely that the tumor is cancerous. The first thing the doctors will do is make a small incision and take a sample of the tumor to pathology, and they will wait for the results before they continue the surgery.

Thank the Lord for Carly’s amazing miracle and continued progress.  Thanks for the unbelievable support of all of her therapy providers.  Pray for her handwriting to continue progressing, speech to improve and for a breakthrough in her memory.  Pray for Katie’s upcoming surgery, control of her pain and a speedy recovery.