Carly had a very uncomfortable night on Friday night. For the last few nights, she has been having uncontrollable body movements during her sleep. In fact, it almost looks like she is dancing a ballet, the way she lifts her legs and moves them in sequences of motions and then points her toes and lays them back down. Even though she is sleeping while she is doing this, we can only imagine that it isn’t very restful sleep, which she very much needs in the evenings.

Last night they gave Carly a medication to help calm her and control the movements at night. Unfortunately, it did not do very well at all! It caused very bad nausea and stomach distress that stretched well into the first half of Saturday. The doctors have given strict instructions to NOT try that medication again, but in a few days they will most likely try another. 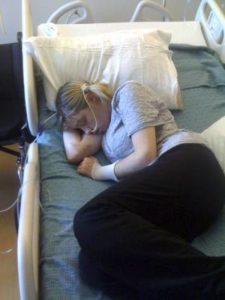 Carly continues to make slow progress. Yesterday, during physical therapy, they took her for her first walk outside! Carl and nurses accompanied her, with IV pole in tow, and she went all the way down the elevator, outside and walked to the next building over. Not only is she walking better, and now only requires the assistance of one person instead of two, she was able to find her own way back to her room! She read all the signs along the way and pushed the buttons on the elevator. She is truly amazing!

During occupational therapy, she was asked what month it was, and she answered correctly (non-verbally), and then they asked her to today’s date, and she responded by not writing the actual date, but the words “today’s date”. Her handwriting is still very small, and this is related to the brain injury and her lack of speech, and is called micrographia. We all joke and say that Carl must have been brain damaged for years, because his handwriting is microscopic and impossible to read! We have been told that her handwriting will grow larger, especially as she learns to talk again.

Every little accomplishment takes so much time and energy on her part. She is wiped out after each thirty-minute therapy session, which is partly why the doctors gave her medicine to see if they could help her sleep more restfully. She is allowed to rest some during the day, and she sleeps peacefully when she naps in the afternoons.

Carly is such an encouragement to us, and she has been so strong and brave. Our source of hope for Carly’s recovery continues to come from the Lord. Please pray that Carly would be calm as she sleeps at night, and have peaceful and restful sleep, without involuntary movements, so that we can avoid the game of finding the correct medication to help calm her.