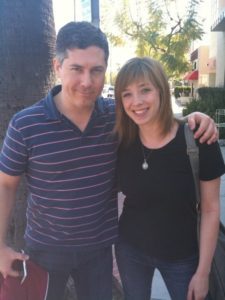 Not long after Carly was injured, one of us was sitting in her hospital room in the ICU, and we had a photo of Carly up on the computer screen. One of the nurses walked in and asked, “Who is that?” We were shocked that they didn’t recognize her, and that night we printed photos to hang in her room. At first, they were just photos of Carly and a few of the whole family. In the last few weeks, friends have been emailing photos and sending cards, so we have started decorating her room with them and putting them all up for Carly to look at.

Two of the photos are of Carly and our cousin, Chris Parnell. One from when she was living in New York, and another from this past spring when she went to visit Katie in Los Angeles. Chris has been amazing, and has written Carly several letters, sent her photos and called to check on her. He’s been very supportive! A few days ago, Carly’s speech therapist walked in and immediately noticed the photos of Carly and Chris! It turns out she’s a huge fan of his. She immediately started talking about the Lazy Sunday Chronicles of Narnia video that he did a few years back on SNL, and Carly immediately perked up. She perked up so much that the speech therapist decided to use the beat from the rap in the video for part of Carly’s therapy, and it ended up being one of Carly’s better speech therapy sessions!

Later that afternoon Carl pulled the video up on Hulu for Carly to watch, and it seemed to make her really happy:-)

It’s been a busy weekend for the Mimstribe. Janie arrived back in Salt Lake City on Friday night to stay with Carly while Carl, Noah and Abi went back to Cedar City to pack. Carl and the kids are now on their way back to Salt Lake City so that the kids can be back in school tomorrow. Please continue to pray for progress for Carly and guidance and wisdom as the Mims family makes decisions about the future. We have been told that Carly may be released and sent home on Wednesday or Thursday, which is truly amazing. There are many different things that need to happen in order for us to be ready for Carly to come home, and there is a lot of coordinating and planning that needs to take place to get her outpatient therapy scheduled and worked out.