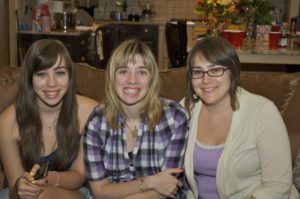 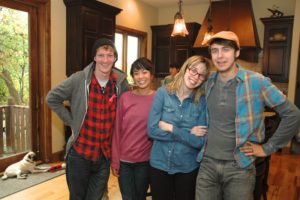 Carly has had a great week!  It ended with Nick Lyon coming from Colorado to visit for the weekend.  Nick and his family have been part of our family since we moved to Florida, and Nick is attending college nearby at Colorado State University.  CSU played the University of Utah in Salt Lake on Saturday.  Nick travels with the team doing sports photography and he came to Salt Lake with his friends Chris and Matt, who are sports writers for the CSU newspaper. Naturally, Tripp and Thy came up from Cedar City for the weekend since Tripp and Nick have been almost inseparable most of their lives.  Carly was so excited to see Nick, Tripp and Thy! She had the best time hanging with them for the weekend.  It’s hard to describe the wonderful warm feeling you get when you see your children having such a good time.  With Tripp and Thy home, plus Nick’s visit, it was a great weekend to cap off a really good week for Carly.

Katie, Carly’s older sister, has been having pain in her hip for about the past seven months.  She originally thought it was just stress and strain from being on her feet so much, because her work at Nickelodeon Studios had her on her feet running around 90% of the time.  It was not uncommon for her to work 14 hour days, and occasionally she would work even longer.  The pain continued to worsen, so she went to see an orthopedic specialist. A month ago she had an MRI and X-rays.  That orthopedist explained that the MRI and X-rays had revealed that Katie’s hip was actually fine, but that she had a bone cyst in her femur, and it would likely require non-invasive surgery to remove. He told her that she needed to see another specialist. She was then referred to an orthopedic hip specialist who immediately put her on crutches once he saw her MRI and X-rays.  His detailed review of the MRI revealed that what we thought was a bone cyst was actually very large, and has weakened her femur substantially, loosing over 2/3 of the bone mass just below the hip ball joint.  She was then referred to an orthopedic oncologist. 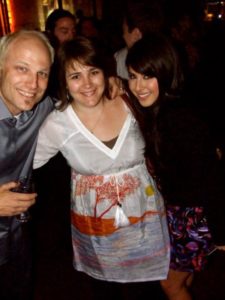 At first, she was unable to get an appointment with the first doctor that was recommended, who is one of the top orthopedic oncologists in LA and works at USC, so she got another referral with a doctor who practices at City of Hope Hospital.  This is one of the leading research hospitals in Southern California.  He spent a long time explaining the MRI and explaining the fact that what the other doctors had thought was just a cyst is actually a very large tumor. He showed her on the MRI exactly where the problems were and described the surgery and recuperation process. The surgery removes the tumor, freezes the cavity to kill any remaining tumor cells and then reconstructs the bone using a bone graph to fill the void. They then and a steel plate along the outside of the femur and a screw going up into the hip to add strength. Needless to say, this is a very invasive and extensive surgery.  He has scheduled surgery for this coming Friday, October 29th.  In the meantime, Katie did get an appointment with the original orthopedic oncologist at USC for this coming Tuesday and will get his second opinion.

Janie is flying to LA on Monday evening to be there for the appointment and Katie’s upcoming surgery.  Pray for decisions regarding Katie’s surgery, for the surgery itself, and for a quick and painless recovery. Please pray that everything at the house will run smoothly while Janie is away.  Pray for Carly’s continued success and therapy sessions to go well and for the entire Mimstribe as we change modes once again.